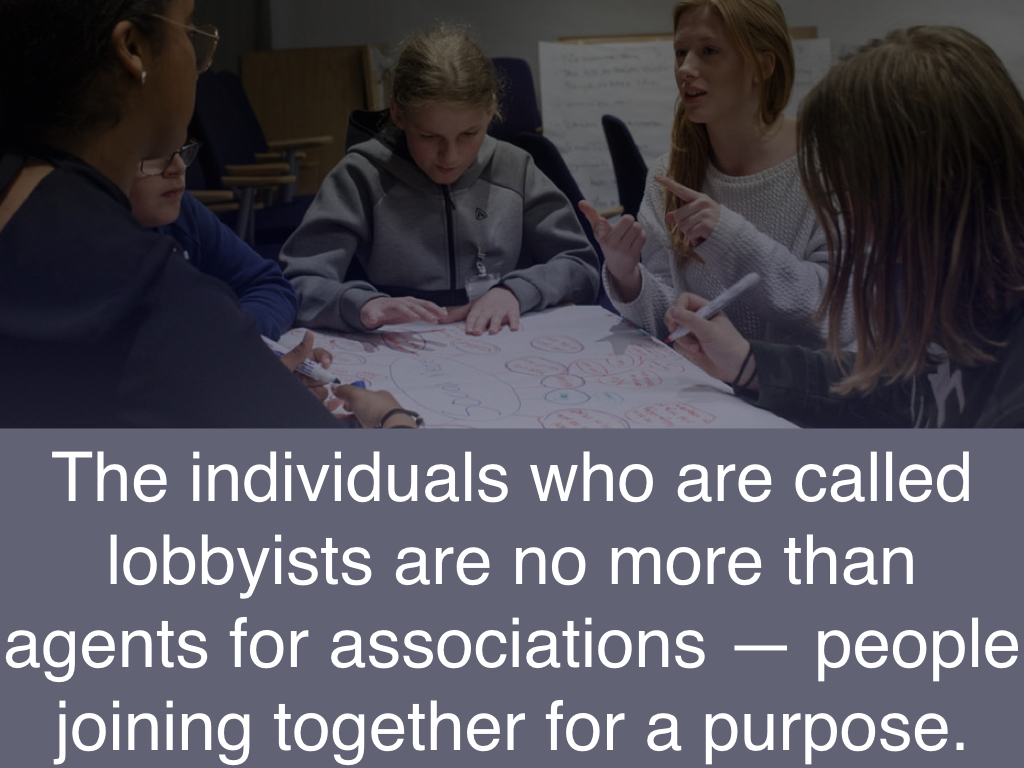 Thank you for the invitation to share some thoughts on your study of the implementation and requirements of Article XIV of the Constitution of North Dakota as they relate to lobbyists.(1)

As legislators, whether you supported or opposed Measure One in the 2018 general election is mostly irrelevant. You have constitutional obligation to implement it in accordance with the requirements of Article XIV. I think that most lobbyists are interested in supporting, not thwarting, that effort.

The new constitutional article, however, leaves many unanswered questions, laws to be established, and policies to be implemented by both this legislative assembly and the Ethics Commission. As all the respective bodies move forward, certain principles and facts should guide our work.

Foremost, implementation should not unduly impair the work of voluntary associations functioning in the democratic process. When reflecting on his visit to the newly formed United States in Democracy in America, Alexis de Tocqueville noted the propensity of Americans to form associations for both political and social purposes.(2) He noted that the creation of associations or groups was not just an inherent part of a democratic society, but was also essential to preserving a democratic system of government. (3) This is why it is imperative that implementation of Article XIV not have a chilling effect on the creation or operation of associations or their ability to communicate with government officials.

It may be fashionable to portray lobbyists as fat cats buying favors with “dark money” from legislators on behalf of wealthy big businesses, but the reality is much different. The individuals who are called lobbyists are no more than agents for associations — people joining together for a purpose which may require them to interact with legislators.

North Dakota law reflects this fact. The Century Code chapter on lobbying, chapter 54-05.1, excludes “a private citizen appearing on the citizen's own behalf.” Every registered lobbyist represents an organization or entity. The law does not require that the lobbyist be paid, be involved in any political activity, or expend any money. It does not require the organization represented be for-profit. In fact, most of the organizations represented by lobbyists are not-for-profit and about half of them are organizations that consist of individuals or entities not seeking financial gain. (4) The law also does not require a minimum threshold of activity. Any organization that wishes to express a position on legislation, whether it is church running a soup kitchen or a large corporation, must do so through a registered lobbyist. Any individual who speaks on behalf of someone else — even if it is a single sentence spoken in the hallway of the Capitol — and does not register risks running afoul of the law.

Any legislation, rule, or policy affecting lobbyists or lobbying, therefore, should be judged as to whether it enhances or diminishes the ability of individuals, through their associations, to function and participate in the democratic process. To better ensure enhancement and not diminishment, the people of North Dakota need certainty, clarity, constitutionality, and accessibility.

Certainty: Private associations need to know the rules of the road. In most respects, the sooner the rules are known, the better. Rules and laws made today could affect their ability to participate in the government process in the future.

Clarity: Many questions exist about how to interpret Article XIV and, in some cases, what rules to follow. If, for example, the Ethics Commission adopts a rule and the legislature enacts a law affecting the same activity, which applies? Any lawyer would advise the organization to comply with the most restrictive. Keep in mind that because the lobbyist registration law is so broad many lobbyists are part-time representatives of their organization and may not know how to interpret conflicting laws or even know of their existence. The Century Code does not require lobbying to be a professional activity.

One potential problem of clarity concerns the definition of lobbyist. Article XIV does not define lobbying or lobbyist. HB 1521 adopted the existing statutory definition to provide clarity. This makes sense for three reasons. First, although it is very broad, it is workable and knowable, providing some certainty and clarity. Second, it was the only legal definition of lobbyist in North Dakota law at the time of Article XIV’s adoption. “Lobby” is, for this purpose, a legal term and Article XIV should be interpreted according to the legal definitions that existed at the time of its adoption. Nevertheless, some people have argued that the Ethics Commission and even the Legislative Assembly should adopt a different or broader definition of lobbyist for purposes of implementing Article XIV. This could lead to confusion, a lack of clarity, and uncertainty, thus chilling participation in the governmental process.

The third reason use of the existing definition of lobbyist makes sense illustrates the third point of consideration: constitutionality. The existing definition of lobbyist is already broad and wide reaching. Many organizations who must register as a lobbyist in North Dakota would not have to do so in another state. Expanding the definition further could violate the U.S. Constitution’s protections for speech, association, religion, privacy, and the right to petition the government. Both the Ethics Commission and the legislature should exercise caution when implementing Article XIV so as to not violate the U.S. Constitution.

Accessibility: The overriding principle for implementation of Article XIV should be accessibility. The laws and rules should not interfere with the ability of individuals to form associations, function according to their own established guidelines, and engage in the governmental process. The state should not force associations to sacrifice their beliefs, practices, or lawful activities as the “admission price” for participating in the democratic system. The more complicated and interfering the rules and laws become, the more chilling the impact, especially for smaller nonprofits, charities, and religious organizations. They cannot afford to hire lawyers and experts to navigate a complicated and confusing field of laws and rules imposed by different government agencies.

The legal reality is that no group or association of any size, purpose, or legal status can, directly or indirectly, work for the passage or defeat of legislation except through a lobbyist. Like it or not, lobbyists are essential to the ability of private associations to participate in the democratic process. For this reason, the legislature and the Ethics Commission should judge any proposal affecting lobbyists according to whether it will have a chilling effect on the activities on the private associations indispensable to a democratic society.

(1) I have served as the executive director and general counsel for the North Dakota Catholic Conference since 1995. Much of my interaction with other entities has been with nonprofit charities, advocacy groups, and religious organizations. Most are like the North Dakota Catholic Conference and do not engage in “political activities” supporting or opposing candidates or parties. Personally, I have not engaged in such activities — other than voting — since 1995.
(2) “Americans of all ages, all conditions, all minds constantly unite. Not only do they have commercial and industrial associations in which all take part, but they also have a thousand other kinds: religious, moral, grave, futile, very general and very particular, immense and very small; Americans use associations to give fêtes, to found seminaries, to build inns, to raise churches, to distribute books, to send missionaries to the antipodes; in this manner they create hospitals, prisons, schools. Finally, if it is a question of bringing to light a truth or developing a sentiment with the support of a great example, they associate.” Excerpted from pages 489-92 of Democracy in America by Alexis de Tocqueville, pp. 489 edited and translated by Harvey C. Mansfield and Delba Winthrop, University of Chicago Press, 2000. https://www.press.uchicago.edu/Misc/Chicago/805328.html
It is important to note that many of the examples Tocqueville gave could not be accomplished today without interaction with government.
(3) The Catholic Church calls these associations “mediating institutions” because they protect the individual from the power of the state and they provide a means for the individual to interact with the state. These mediating institutions, whether they are economic, social, cultural, sports-oriented, recreational, professional, or political are essential to a civil society because they respect the dignity of the human person. In turn, a just government does suppress mediating institutions, but supports them in their efforts.
(4) Some of the confusion about nonprofit organizations and “lobbying” activities stems from misunderstandings about the type of conduct in which nonprofit organizations can engage under federal law. Here are some brief points for consideration:
501(c)(3) Organizations

Many nonprofit organizations are 501(c)(3) organizations for federal tax purposes. These organizations are allowed to “lobby” so long as it is not a substantial part of their total activities, but cannot support or oppose a candidate or political party. They can, however, take a position and spend money on a ballot measure.

Although many nonprofit organizations are 501(c)(3)s, many others are 501(c)(4)s. Contributors are not eligible for the charitable deduction, but the organization is tax-exempt and there is no limit on the amount of lobbying.

In short, charity, advocacy, and religious organizations operate under a variety of federal structures, which may not fit a one-size-fits-all state law.