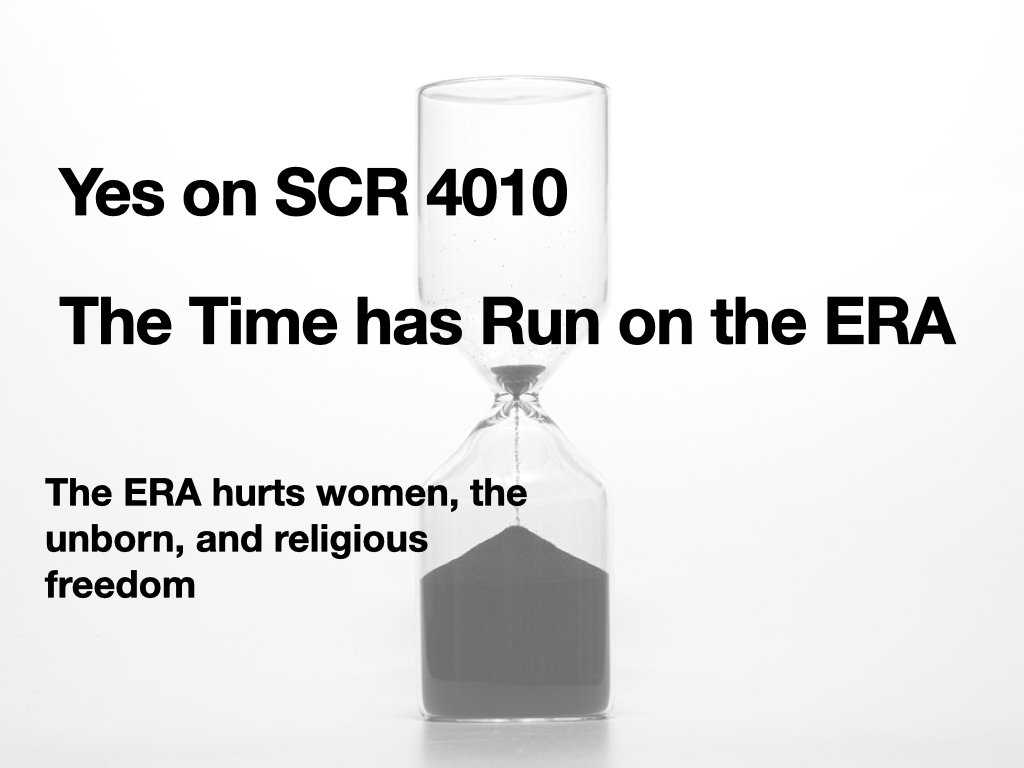 This resolution is not about whether women and men should be treated with equal dignity. The call for equal respect is rooted in who we are as human persons. It is not about ensuring just wages and fair treatment for women. The Catholic bishops of the United States have advocated for that for over a hundred years. This resolution is solely about whether the time for ratification of the Equal Rights Amendment has passed and about whether Congress and others should attempt to resurrect a dead amendment in light of what we now know about how the amendment, if revived, would be interpreted.

When introduced, the nation’s Catholic bishops opposed the Equal Rights Amendment because of concerns that the word “sex” could be interpreted to mean a “right” to abortion and more. Their concerns proved accurate. “Sex” has since been interpreted by some courts and government agencies to require payment for, and performance of, elective abortions and transgender surgery.1

To demonstrate that this is not a far-fetched claim, we can look to a case close to home.

Passed in 2010, the Affordable Care Act prohibits any federally funded or administered health program or activity — broadly defined — from engaging in discrimination. Rather than listing the types of discrimination prohibited, the act incorporated several nondiscrimination provisions already in federal law, including Title IX, which prohibits discrimination “on the basis of sex.”
Using that provision, Health and Human Services defined “sex” to include “discrimination on the basis of . . . termination of pregnancy, . . . sex stereotyping, and gender identity.”2 It then defined discrimination based on “gender identity” to prohibit a healthcare provider from refusing to offer medical services for gender transitions if that provider offered comparable services, such as gynecological services, to others.3 In short, prohibition on the basis of sex became a mandate to cover and perform elective abortions and transgender surgeries.

The state of North Dakota joined the suit for four reasons. First, the state operates a State Hospital that could have been required to provide elective abortions and transgender surgery. Second, it has a Medicaid program that excludes coverage for elective abortions and gender reassignment surgeries. Third, the state PERS plan excludes coverage for those procedures. Fourth, the state employs healthcare providers who, as state employees, would have had to perform elected abortions and gender reassignment surgery.

Eventually, in January of this year, U.S. District Court Judge Peter Welte in Fargo granted victory to the state and the Catholic plaintiffs, at least for now.4 Appeals might be pending. The judgment is based on procedural matters and that, as applied to the religious plaintiffs, the rules violate the Religious Freedom Restoration Act. What is important for this committee to understand is that it was never disputed, even during the Trump Administration, that the rules, required coverage and performance of elective abortions and gender reassignment surgery and that this requirement stemmed solely from the word “sex.”

Considering the amendment’s threats to human life, state laws, and religious freedom, North Dakota should pass SCR 4010 send a message that its prior ratification no longer stands and that Congress should not attempt to revive a long dead and seriously flawed amendment.
We urge a Do Pass recommendation on SCR 4010.

1 The attached Fact Sheet on the ERA released just last week from the United States Conference of Catholic Bishops summarizes the history and problems with the amendment. https://www.usccb.org/resources/2021.ERA%20Factsheet%20final.pdf